skip to main | skip to sidebar

MY EXPERIENCE WITH PRE- TESTING OF THE SURVEY..

I got really excited when I got to know about the questionnaire and pre-testing. I had some rough idea about how would it go, but when I actually landed at Janak Puri district centre, at least I got to know that I had no idea of the real scene. So here's how it went…I approached two young girls sitting on a bench, I asked them "Are you free right now?", they answered "Yes we are", great, 1st hurdle crossed, " Can you please give me ten minutes of yours?" "Alright". I
started feeling a little better. After giving information about where I am from and what I am up to, one of them asked "Can I have a look at the questionnaire?", "Sure". Then one of them said "Hum already office mein itna dimag lagakar aiye hain , ab isme dimag nahi lagaya jayage".
Well, I didn't have much to say on this comment, and they too seemed reluctant and said they might not be able to give that much time. So, I handed over the pamphlet on AIDS awareness to them and moved on. And the best part was yet to come, after I moved, I was standing at a
nearby place, from where I could see those girls chatting there for another 10- 12 minutes. I just thought "they could easily fill the questionnaire and gain some knowledge rather than chatting".

There were many instances; this one was just swallowed by me, actually kind of gulped! She actually made my temperature go up, but for a little while, as I quickly cooled down, don't know how? I went up to her, she was there at Craft Bazaar with her friends, I politely asked
the same question "Could you give me your ten minutes?", and she answered back rudely saying "We are not interested", since I couldn't take this, I just told her, trying to be very calm "I 'am not selling anything, I am just taking a survey on AIDS awareness." Phew! That was a bad one. But I guess, this is how we learn.
In another case, I went up to a girl sitting alone, after giving all the introduction and stuff, I gave her the questionnaire. She started of f by writing off her name and other details. As she
moved on to do the questions, while I quietly observed her answers, it was like this. First question wrong, then third then fourth and the list continued. She read some and just skipped answering them. Turned the page, she didn't knew even the "H" of HIV and "A" of "AIDS". I just thought I might have to spend some more time with this girl giving her all the information I could. But as I began, I don't know what happened to her, suddenly she felt so awkward and uncomfortable listening to words like" sex" and the like. I told her not to be afraid and shy away, but obviously I couldn't force her. The choice was hers after all. So, I finally had to leave
her, but not like that, I gave her the pamphlet and told her to at least go through it.
But there were other instances which actually made my day. As Rahul approached a group of guys, I too stood there, one of the friends joined a little later; I gave him information about Vol India, Naz, and told him about the survey. That boy seemed pretty decent. He took
the questionnaire from me and filled it. After that he very patiently listened to the answers which he had got right, and the ones which he had got wrong. He was very keen to know the "whys" of the question too. Though my voice was really bad, but his eagerness made me forget
that I had lost my voice just a day before and was still recovering. After informing him about everything I could, I thanked that group of friends for giving their time. Then I approached another group of guys, they too seemed willing and were very cooperative as far as
filling the questionnaire and listening to the information was concerned. Giving these two groups of guys all the information made me feel very satisfied, that at least I could impart awareness among some of them.

This was just the first day and I got to learn so much. I' am sure with each person I'll come across; I get to learn much more. I 'am ready for that too. And for all this I deeply thank Volindia
Posted by Muneer at 11:49 AM 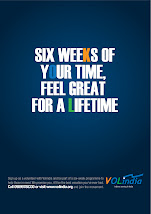 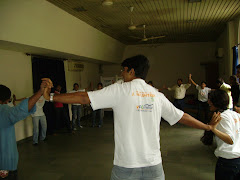 Joining hands to make a difference